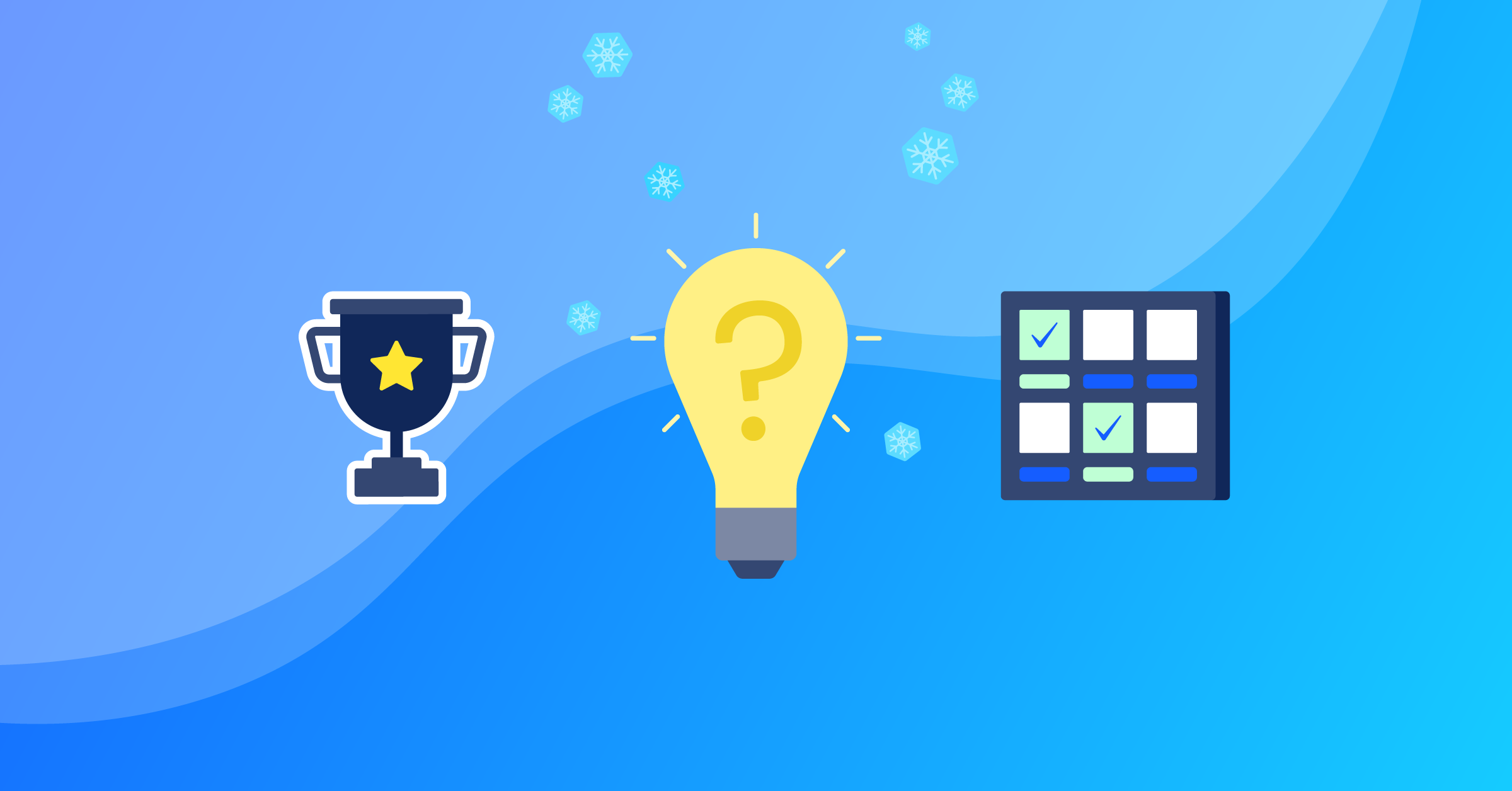 Do you want to delight your Facebook followers this season while increasing your revenue? Although holiday sales represent roughly 20% of annual retail sales each year, your profit is often higher due to increased volume without extra fixed costs. The right mix of Facebook contests, polls, and giveaways expands your reach while directing your audience towards gift-giving solutions.

If your main goal is to boost sales in December and attract last-minute buyers, then these ideas will get your creative juices flowing. Discover nine fun ways to engage your audience then start filling up your editorial calendar.

From comic relief to a fist bump of solidarity with online friends, Facebook contests, polls, and giveaways reduce your follower’s stress and encourage fun. People are exhausted trying to keep up with the holiday spirit (and family, friends, and co-workers).

A well-done campaign isn’t a hard sell. Instead, it’s a gradual nudge towards purchasing a product that provides a solution. Do your part to increase brand visibility and holiday sales by developing a Facebook promotion strategy designed to capture the attention of your time-strapped (and tired) audience members.

If you want to start counting down on the 12th of December, wonderful. If you’d rather get started at the beginning of the month, then even better. The thing is, for many consumers, the Christmas countdown and the pressure began as soon as retail stores added Christmas products to the shopping aisles. With a Christmas countdown sweepstakes, you determine the timeline. Popular options consist of: 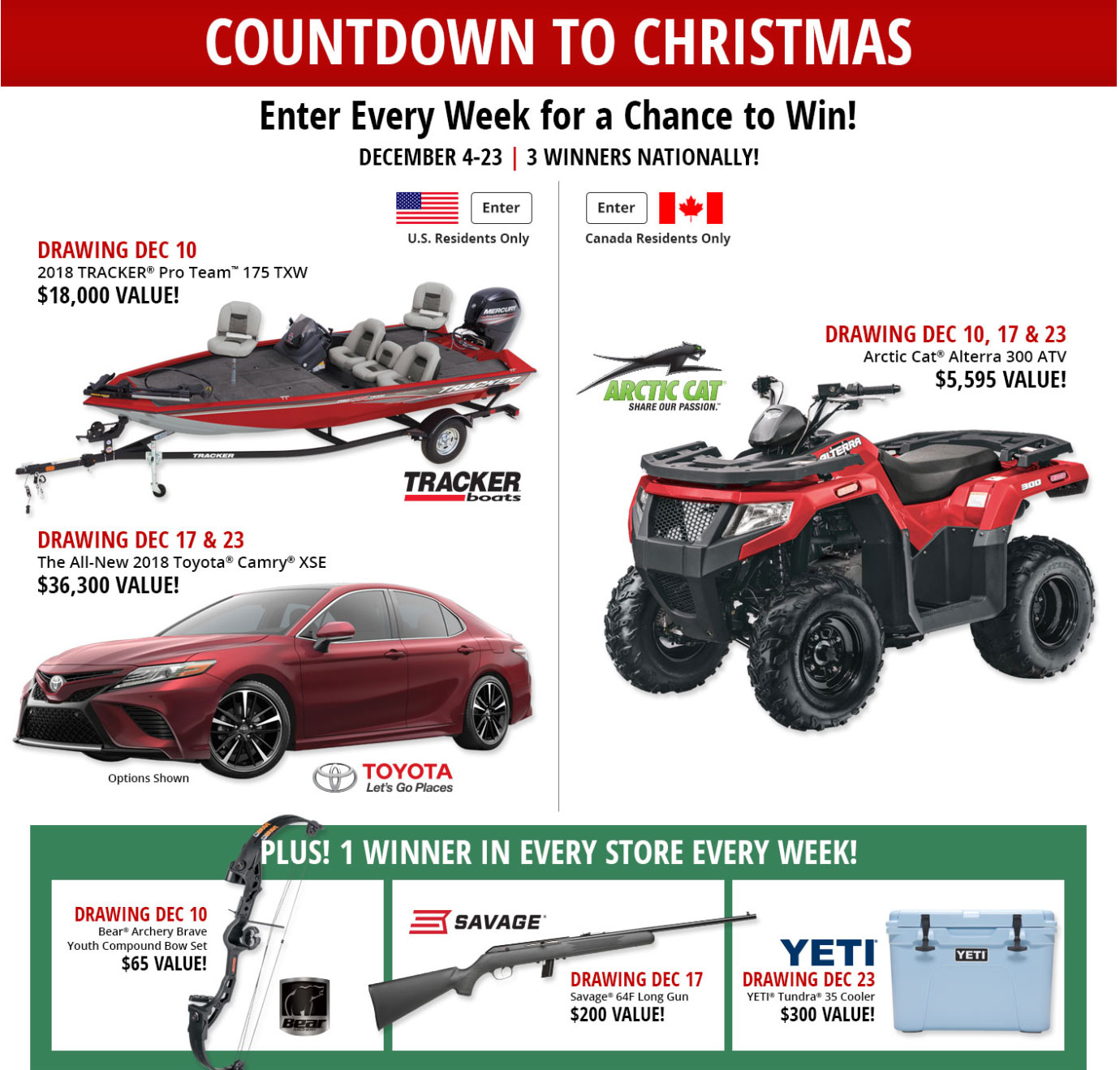 2. Elf on the Shelf Poll and Contest Ideas

Love it or hate it, Elf on the Shelf is continues to draw attention on the web. Since 2005, more than 11 million copies of the book have been sold. With millions of elves on shelves across the country, an Elf on the Shelf Facebook poll, contest, or giveaway is sure to increase engagement on social media.

The key to an Elf on the Shelf contest is knowing your audience, as not all people consider the elf harmless. Authors of an academic study say, “Although The Elf on the Shelf has received positive media attention and has been embraced by millions of parents and teachers, it nevertheless represents something disturbing.”

Take a Facebook Poll: Elf Escapades? Yes or No?

Poke Fun With a Facebook Giveaway: Inappropriate or Creepy Elves 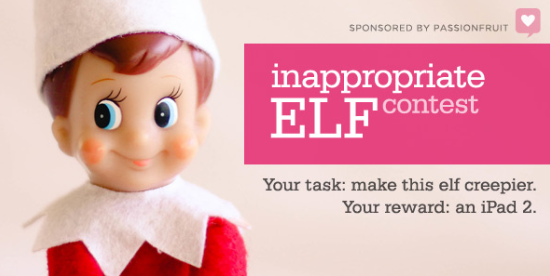 Join in on the Festivities With a Facebook Photo Contest 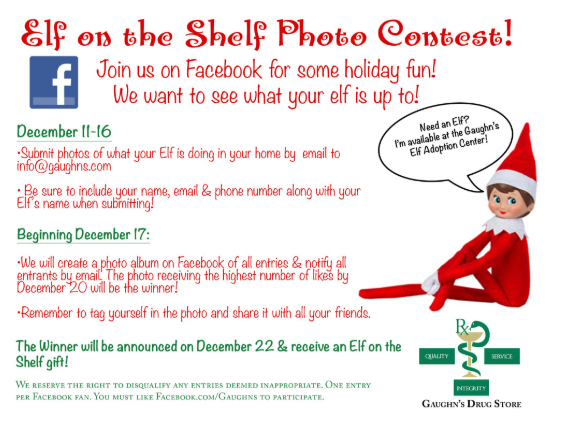 From frazzled parents shopping for that sold-out toy to festive all-day extravaganzas with friends, the holidays present plenty of intriguing shopping moments. With the availability of photo editing software, you can choose a personal photo and inject a hilarious element.

Consider adding a blank thought or speech bubble to your Facebook photo. Then, create a Facebook contest where users submit their best captions, and you choose a winner. 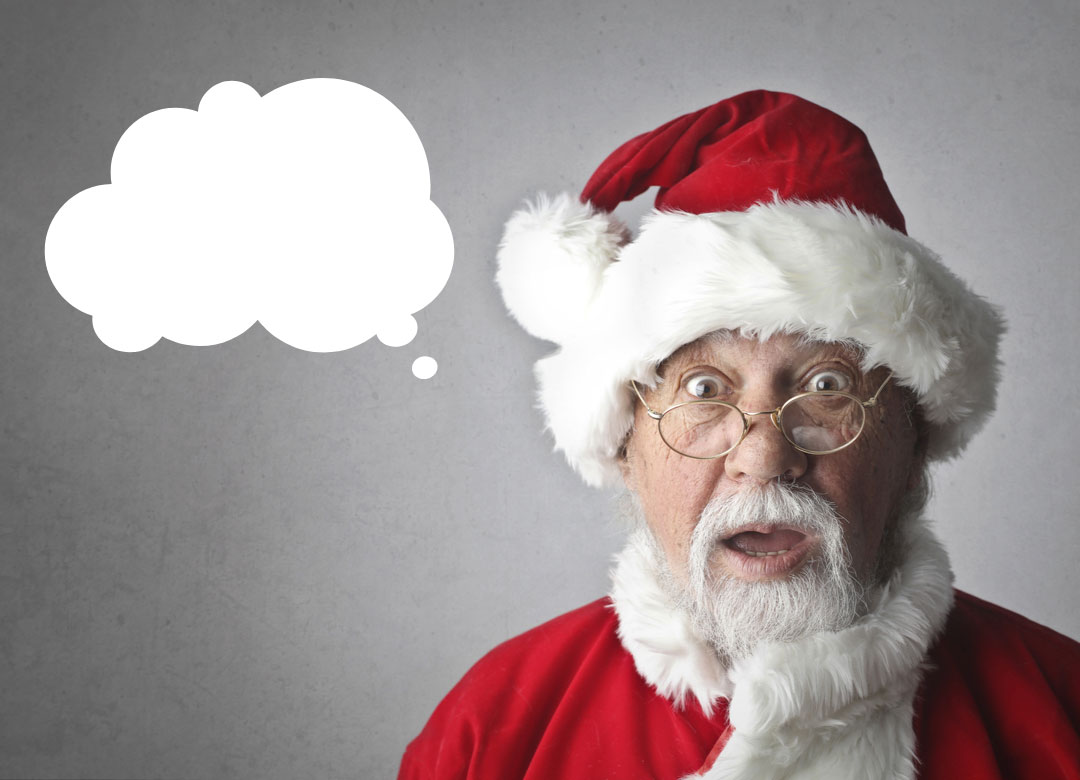 Winter solstice is both the shortest day of the year and the official start of winter. Plus, it’s a fun way to involve your audience in non-Christmas related events. Now, it’s not well-known, but the exact hour of winter solstice varies according to your location. Promote the solstice on your Facebook page by:

More than 250 million people use Pinterest every month for a variety of reasons, from finding a recipe to planning a party. Yet, hundreds of thousands of people also follow boards related to Pinterest fails. In an Instagrammable world where life appears perfect, social media users flock to sites showing a more human side.

Take advantage of this concept by tailoring a Facebook contest to your audience. For example, if your followers love baking, then ask them to share their gingerbread house fails, or a Christmas treat that tastes way better than it looks. 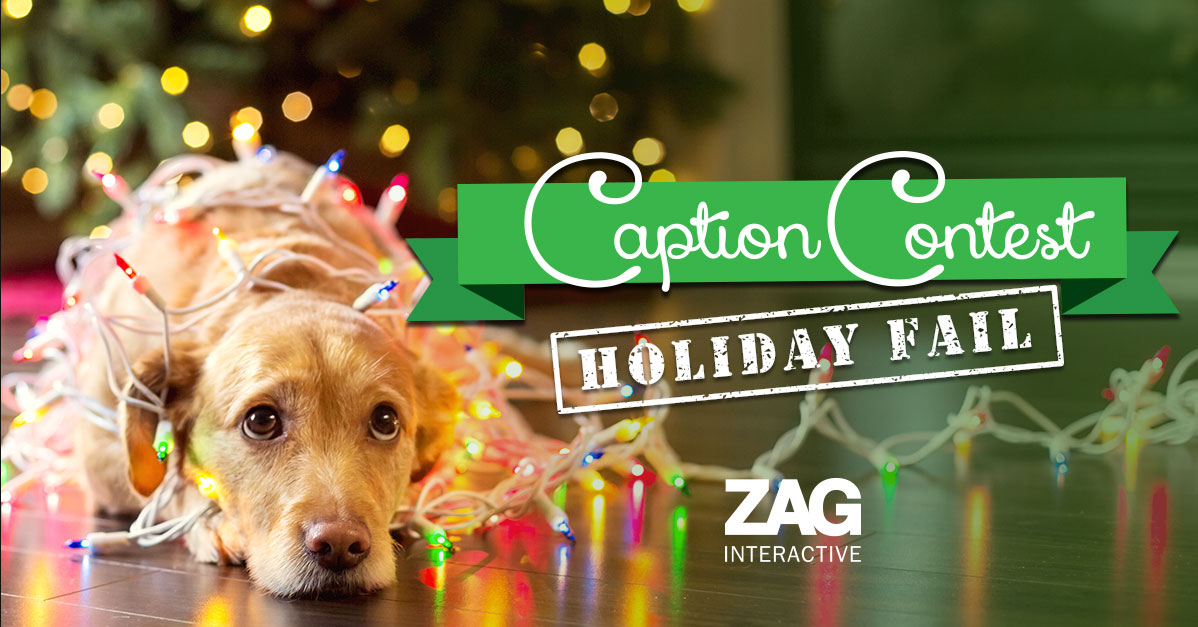 Your audience wants to help others make the best choices, which is why they share useful Facebook posts. Plus, consumers use social proof for their decision-making as well. Create Facebook polls and photo contests that generate goodwill so users can give and receive ideas to make the holidays better. Leverage the Facebook gallery option to provide social proof and encouragement. 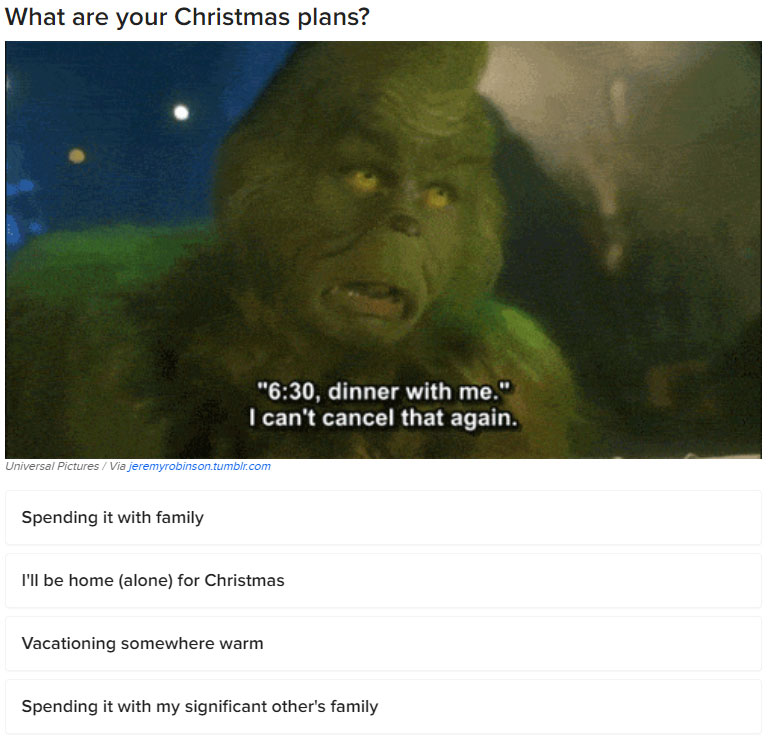 Throughout the year, 244.96 million Americans consume store-bought cookies. However, even non-bakers find themselves pulled towards a cookbook in December. Delight your Facebook followers by celebrating one or both of the national cookie days.

You can ask users to send in their best cookie recipe, tag a friend who bakes or submit a photo. Go a step further and include a gallery so your followers can vote on (and be inspired by) their favorite images or recipes.

We’ve all heard the refrain, “Treat yourself,” when it comes to making a purchase. But, during the holiday season, shoppers expect to spend roughly $344 on gifts for themselves. Build upon this idea by asking users to share their (or a family member’s) wish list with your brand.

Since 23% of shoppers plan to use social media to help with their holiday shopping process, a Facebook wish list sweepstakes is a fantastic way to showcase your company’s products and reach your Facebook goals. 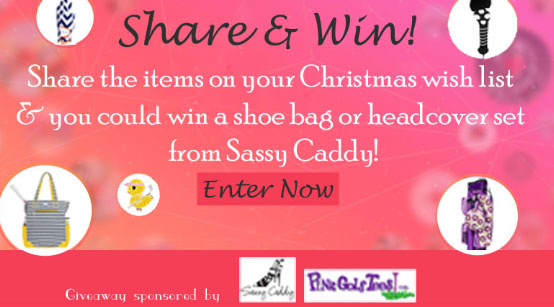 People aren’t afraid of video, so get them involved with a video contest called Gift Wrapping while Rapping. You can either come up with a rhyming rap for followers to repeat or ask them to create their own songs. Want to get extra brand visibility with this Facebook contest? Request videos of your followers wrapping your company’s products. After all, user-generated content (when mixed in with your brand’s videos) increases engagement by 28%. 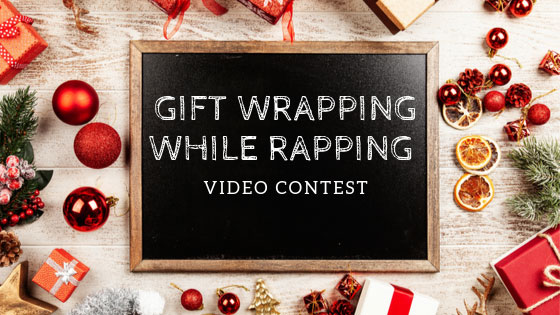 The right mix of Facebook contests, polls, sweepstakes, and giveaways will generate an abundance of user-generated-content while increasing your sales and brand visibility. Fill your editorial calendar with suggestions from this list. Or discover more inspiration with these social media contest ideas and examples.

Get Help from Woobox Support

Need help planning your December Facebook contests? Woobox Support is available for help from 8 am until 5 pm PST, Monday through Friday at 1-360-450-5200 or support@woobox.com.