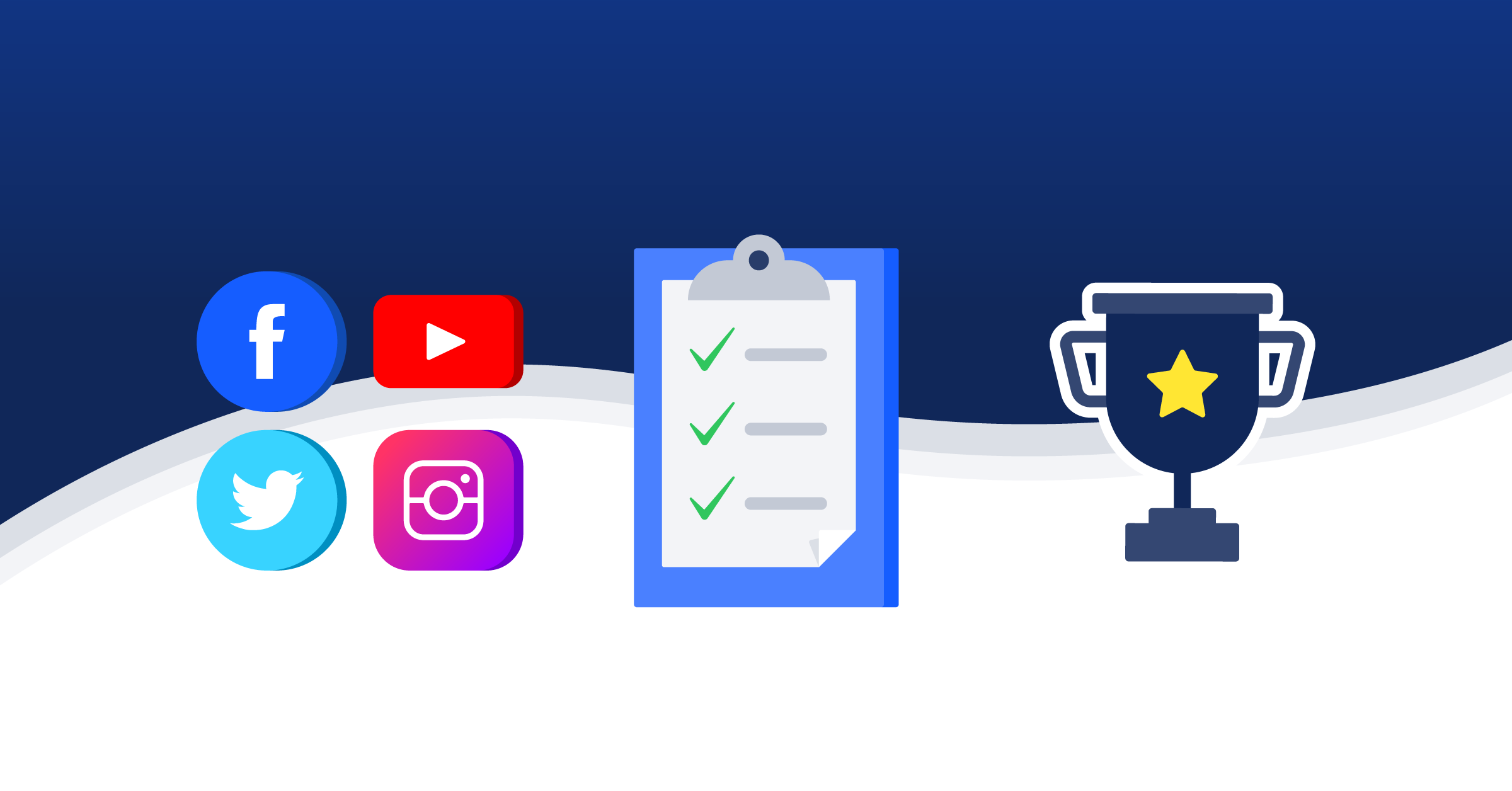 When running a social media contest, you want to make sure you’re following the contest and giveaway rules so your promotion is compliant with all platforms you’re advertising on.

Almost all social media platforms have official, specific rules for how contests and promotions should be run and disclosed in posts.

For the main networks like Facebook, Instagram, YouTube, and Twitter, it’s important to review each platform’s specific giveaway or contest rules, as they may vary between one another. This ensures that everyone is on the same page as to how to enter, how a winner is picked, and the terms for prize fulfillment. It also clears a social media platform from any responsibility for the contest.

Below are current guidelines for each platform, as well as tips for ensuring that you’re following the rules for your own giveaway or sweepstakes.

According to the official Facebook guidelines for pages and groups, any giveaways or contests promoted through Facebook must include a disclaimer that Facebook is in no way involved in the promotion.

This also means they are not going to administer it for you. All contest entrants are waiving Facebook from any liability or responsibility for anything related to the promotion. If you don’t follow these guidelines, your post or page may be removed by Facebook support staff, especially if someone reports it.

Because there are thousands and thousands of Facebook pages and groups on this site, Facebook staff is unable to police everything, but that doesn’t mean you shouldn’t follow the rules. You never know when you’ll get caught and lose your entire entrants list or the ability to post it all.

Facebook also does not allow pages or groups to require users to like their page or share something on a friend’s page as the only requirement to enter. As a result, many marketers are asking entrants to simply visit their Facebook page, but don’t explicitly tell them to like it. This is a way to get traffic to your Facebook page without violating Facebook’s rules of requiring users to complete actions they might have not done otherwise.

One thing Facebook does allow is the ability to use apps on page tabs to conduct promotions. Woobox has a Facebook contest tabs app that makes it easy to set up. No matter how you’re sharing the news about your contest on Facebook, whether it’s a link to an outside entry page or a tab directly on your Facebook page, make sure you’re following the above guidelines in your original announcement contest post and any posts following reminding users about the giveaway.

Because Instagram is owned by Facebook, they have some of the same rules. For instance, they require the giveaway host to completely run the contest themselves, as Instagram will not participate in any way. They also require accounts to have an official rules page. This can be linked to in your bio, as well as a shortened link in the caption of any posts promoting the contest.

Instagram also states they are in no way liable for the giveaway and those hosting giveaways on the platform are doing so at their own risk. Entrants also are waiving any liability to Instagram whenever they are entering a giveaway or contest.

Additionally, the popular photo and video sharing app doesn’t allow contest hosts to ask users to enter by tagging themselves in anything they aren’t actually creating or part of. For example, users shouldn’t be asked to tag themselves in a photo that they aren’t actually in. This essentially means you shouldn’t ask users to take any action that is untruthful about themselves on the platform. Even though it doesn’t explicitly say, avoid asking users to post fake reviews about your company or products, as this would likely also be against the rules.

Social Media Examiner lists a few of the contest types that users are administrating on the platform. This includes creating a post within the contest entry rules and using a specific hashtag or tagging the brand account, as well as a comment entry on the original sweepstakes post.

When it comes down to it, clear and honest communication is key for Instagram. Social Media Today also recommends that the official rules and post captions need to include clear guidelines about how to enter the contest. Disclosing the details of how the prize will be fulfilled and when the winner will be announced is also important. The Instagram caption character limit is 2200 characters, so there is more than enough room to include official rules and other guidelines that follow Instagram promotional rules and best practices.

It also states that any attempt at manipulation of YouTube metrics, such as requiring likes or using fake or spam comments, is also not allowed. One way to go is by randomly picking a comment from any of your YouTube videos.

YouTube is a little more strict with their guidelines on what to include in the official rules for the promotion. Requirements include:

As with any contest in the United States, the contest must also be truly free to enter. Requiring an entrant to buy anything in order to win is technically not only against YouTube’s rules, but US rules as well. YouTube suggests that contest hosts review their state and national lottery laws to make sure they are covered, as YouTube contest promotions is likely counted as a lottery.

Twitter has some of the same rules as the above social media platforms, such as following local laws and regulations and following Twitter rules and best practices.

Beyond that, they explicitly state that contest hosts should specifically discourage the creation of additional accounts to enter the contest. This helps Twitter cut down on inactive and spam accounts while also giving users a fair chance to win.

Twitter also asks that posting the same tweet over and over again shouldn’t be encouraged or allowed in the platform. In fact, official rules should mention that multiple tweets with the same contest will disqualify a user from the contest. This helps prevent spammers or bots from tweeting the same message over and over again and gives regular users a fair chance.

Twitter encourages the community to keep everyone who is administering a giveaway accountable for how they are administering a contest on the platform. At the end of Twitter’s official rules, they link to a violation report page that explains how users can report specific tweets or profiles for not following promotion rules.

Usually, Twitter contests include retweeting a tweet, tweeting with a specific hashtag, or replying a tweet to enter. Social Media Examiner suggests including additional hashtags related to giveaways, such as #win, #sweepstakes, and #giveaway to get more exposure and engagement for the contest. Many Twitter users search these hashtags to find giveaways to enter.

As a final reminder, with any giveaway on any platform, it’s crucial to also comply with FTC guidelines on working with sponsors. If a sponsor or advertiser sent you free product, giveaway prizes, or is compensating you in any way to run the contest, it must be disclosed within all contest promotion posts. Any hashtags used as a sponsorship disclosure must be completely clear. For instance, stating #AcmePartner isn’t as clear as #sponsored or #ad. Be sure to research and plan your sponsored disclosure in every post to make sure it complies with FTC guidelines.

No matter what platform you are promoting your contest on, make sure to include a link to the official rules, state clearly how users can enter, and do not require users to take any actions for an entry, besides giving their information or sharing their insight.

For example, according to official rules, it is OK to give bonus entries for visiting a Facebook page, but it shouldn’t be a requirement to like a page on Facebook in order to win. Even though many brands and influencers don’t follow the aforementioned guidelines, it doesn’t mean you shouldn’t either. Social platforms will enforce their rules through a variety of moderation actions. Be smart and transparent with your social media contest, avoiding frustrations from entrants and trouble with the platform support staff.

Looking for help to setup or administer your social media contest? Woobox support is available to help from 8am – 5pm PST, Mon through Fri at 1-360-450-5200 or via support@woobox.com.