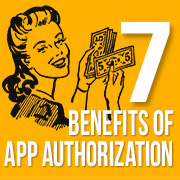 7 Benefits of App Authorization for Sweepstakes 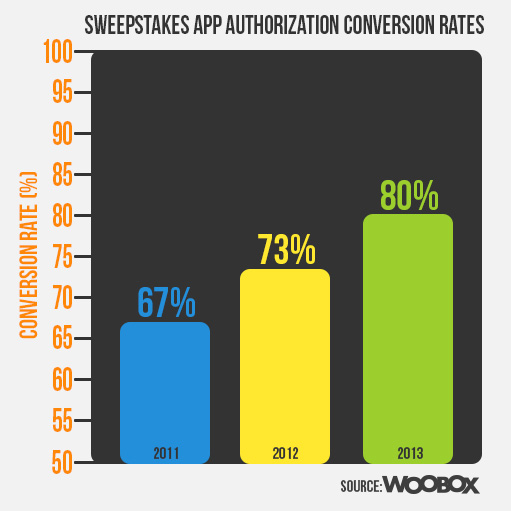 We’ve compiled the 7 most compelling reasons why you should include app authorizations in your next sweepstakes, and hope to compel you to give it a try:

1) Make it Easy for Your Fans: Enabling app authorization is like one-click shopping for your fans. No forms to fill out, no lengthy time commitment to enter, they simply click to authorize the sweepstakes app, and boom! They are entered. The information you gather via app authorization is likely the same info you would require if you asked them to fill in a form, but you’ve reduced the effort it takes to provide that information significantly.

2) Information Gathering:  Building your database of fans in the hopes of turning them into paying customers is a huge benefit of app authorization. You can build an email database for your newsletter, birthdays for rewards programs, or geographic location for your geotargeting. Just make sure that if you ask additional questions that you only ask what is absolutely necessary – too many questions can decrease your conversion rate.

3) Open Graph Sharing: Woobox sweepstakes apps offer the ability to do automatic sharing of a user’s entry into a promotion. By simply checking a box you can automatically have an open graph story posted to a users timeline about the user entering your promotion.  Once the user has authorized the app, this sharing can occur automatically.

4) Custom Audience Ad Targeting: When the user authorizes an app, you are able to access their Facebook ID to use later in a highly targeted Facebook ad campaign. If you follow the rules of relevancy in your sweepstakes campaign, chances are these are people that are interested in your brand or brand category and can be targeted with a creative ad message and a compelling offer.

5) Mobile Like Gating: Requesting app authorization enables you to do fangating on mobile devices. According to Facebook, there are over 750 million monthly mobile active users on Facebook (a 54% increase over last year), and sweepstakes app authorization allows you to capture their data regardless of the device they access your sweepstakes from.

6) Award Bonus Entries: Even though you can’t award bonus entries for users sharing to Facebook (that would be against the rules), but you can give them bonus entries for every friend that enters.  Woobox pioneered this method years ago and it is still one of our most popular settings.

7) Fraud Prevention: It’s much easier to set up 100 gmail or yahoo email addresses than it is to set up 100 fake Facebook accounts – and Facebook takes user fraud very seriously, making it difficult for users to set up multiple fake accounts. You also have access to much more data to detect fraud.  By requiring app authorization you are helping to ensure that the entrants in your promotion are actual people and that everyone has a fair shot at the big prize.

Bottom Line: Users are allowing app authorizations on Facebook at an increasing rate. Proving that sharing personal data with brands in exchange for the chance to win a prize is enough of a motivation for them to provide their information. When used as part of a larger branding campaign it can be a powerful tool in your social media marketing efforts. Just remember to adhere to the rules of relevancy, so that you don’t attract the wrong fans to your sweepstakes!