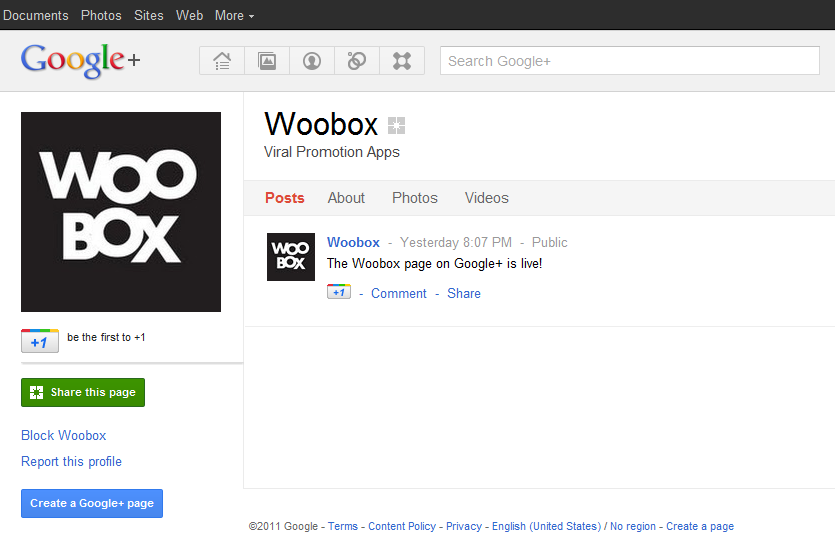 Have you read the Google+ page promotion policies yet?  Here they are: http://www.google.com/intl/en/+/policy/pagescontestpolicy.html

The first line of the policy reads: You may not run contests, sweepstakes, offers, coupons or other such promotions (“Promotion”) directly on your Google+ Page. What does that really mean?  What is directly on the page?

Google helps clarify in the next sentence:  You may display a link on your Google+ Page to a separate site where your Promotion is hosted … Great. That’s exactly what Woobox does, host your promotions.   Since there is no Google+ equivalent (yet) to a Facebook tab, and no way to actually build a page app for Google pages, the policy language is probably temporary.   It’s hard to imagine Google won’t change these restrictions once they launch apps.  Promotion apps are one of the most popular ways pages engage with users on Facebook and Google will want to provide a means to do that in some way on their platform.

So what are these policies trying to accomplish then?  In reality they aren’t much different than what Facebook restricts.  On Facebook, you can’t use any Facebook mechanism as the means of entering a promotion.    You can restrict and gate promotions behind liking, but you can’t say “click the Like button and you’re automatically entered.”  Google’s policy is really accomplishing the same thing.  Given there are no apps for pages, if you were to run a promotion directly on a Google+ page it would be something similar to add us to your circle for a chance to win.   Facebook requires you to use a third party app for your promotions, Google doesn’t have apps yet, so no promotions directly on the page… yet.

Of course that doesn’t stop you from posting your Woobox promotions on your Google+ wall.  We’re already working on adding Google+ page functionality to our apps so expect an announcement soon on that.  If you want to add Woobox to your circles, you can find our Google+ page here.