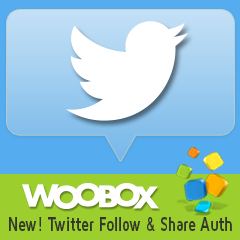 Woobox has added new tweet & follow elements for entry forms that allow you to require entrants to tweet or follow your Twitter handle in order to participate in the promotion  – or include as an optional source for bonus entries.  The best part is, unlike our old options, the Twitter app authorization dialog is now optional but the requirement to tweet or follow can still be verified.  It is now easier than ever to grow your Twitter following, increase your brand presence, and improve the viral nature of Twitter promotions!

You can add the new Twitter options to your entry form by adding them in the “Form Fields” section of any promotion in the dashboard. Here’s a breakdown for how each one works:

If you are looking to grow your Twitter following, then this is a great option to add to your promotions. Enter the Twitter handle of the account you want entrants to follow (‘woobox’ in the below example – no need to include the ‘@’, as that is already included for you), then use the drop down menu to select if you want following to be required or optional. If you choose “Require user to Follow” then you will see another drop down menu asking if you want to verify users via a username field or Twitter Auth:

If you choose to use the “username field” option for verification, the entry form will look like the one pictured below. Entrants would first need to click on “Follow @yourcompanyname” and then enter their own Twitter Username before hitting enter. Behind the scenes, our software will verify that the entered Twitter username follows the account associated with the one you set up in the dashboard and is linked to the follow button. 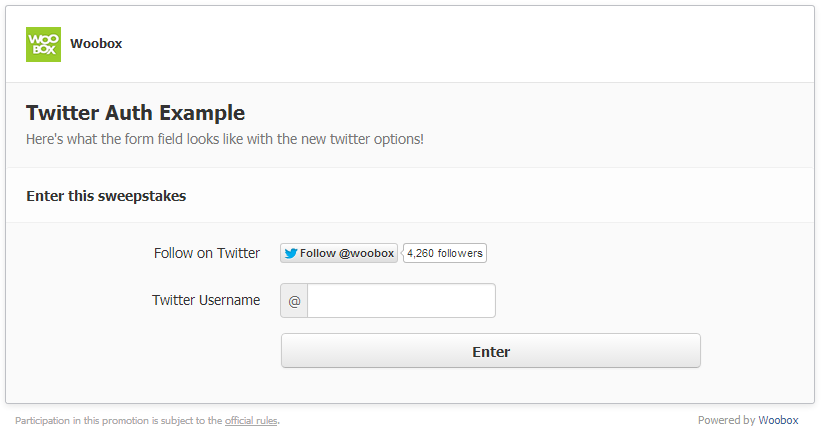 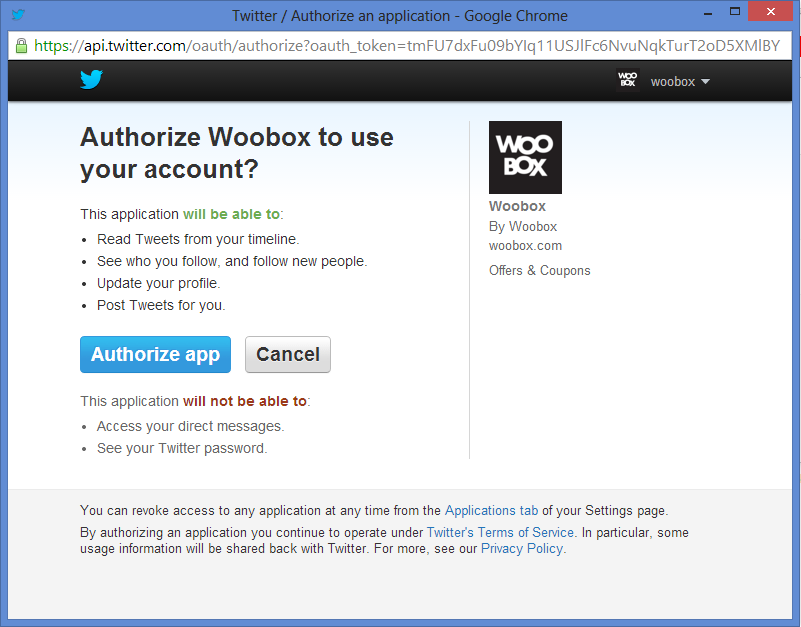 By requiring entrants to share your promotion, you increase the virility of it! If your fear that requiring sharing will limit your pool of entrants, you can also make sharing optional and incentive it by offering up to 5 bonus entries.

This option requires the entrant to tweet the offer to their followers using the tweet button. While the message will populate with your default message, they can personalize the message with their own text. Tweets using this method will be verified, but the user will not be required to include the offer URL in the Tweet:

This is what the form field will look like in the entry form: 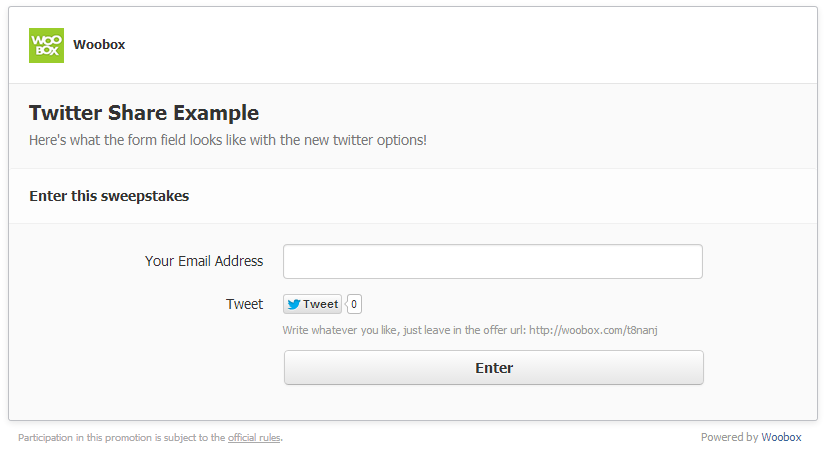 Users can tweet the message as-is or customize their message. Once they tweet the content they will be eligible to press “Enter” on the entry form.

The form will looks like this, and will prompt the user to authorize the app after they click Enter.   With this option you can require that the Tweet must contain the link back to your promotion.   Once the user submits the form, our software will automatically send the Tweet via the authorized user’s Twitter account. 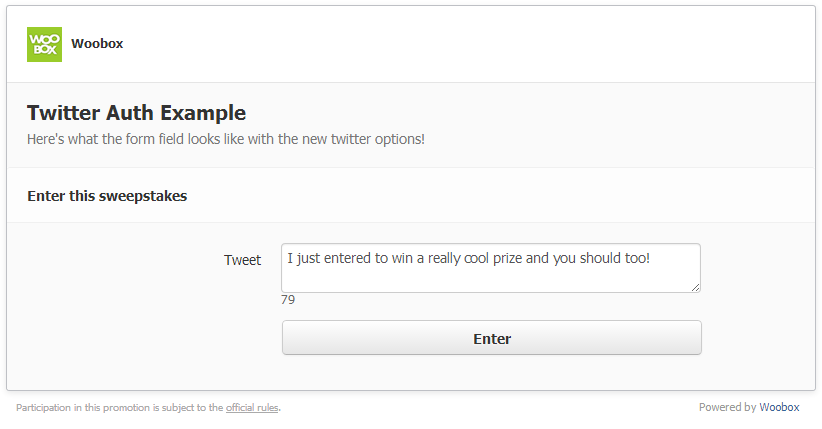 Do Not Require Tweeting, But Offer Bonus Entries for Tweeting

If you don’t want to include a Tweet requirement, you can still incentive sharing by offering bonus entries for doing so. You can authorize this the same way as the required tweeting option, by either using the tweet button:

The entrant will get a message on the form that lets them know that they will get bonus entries for tweeting the offer: 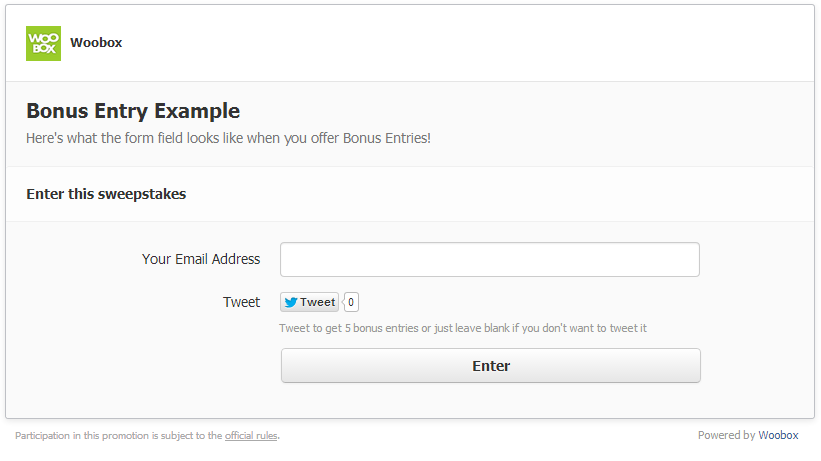 You can customize the message that is the default Twitter message field by clicking on the “Sharing” tab for that campaign in the dashboard. 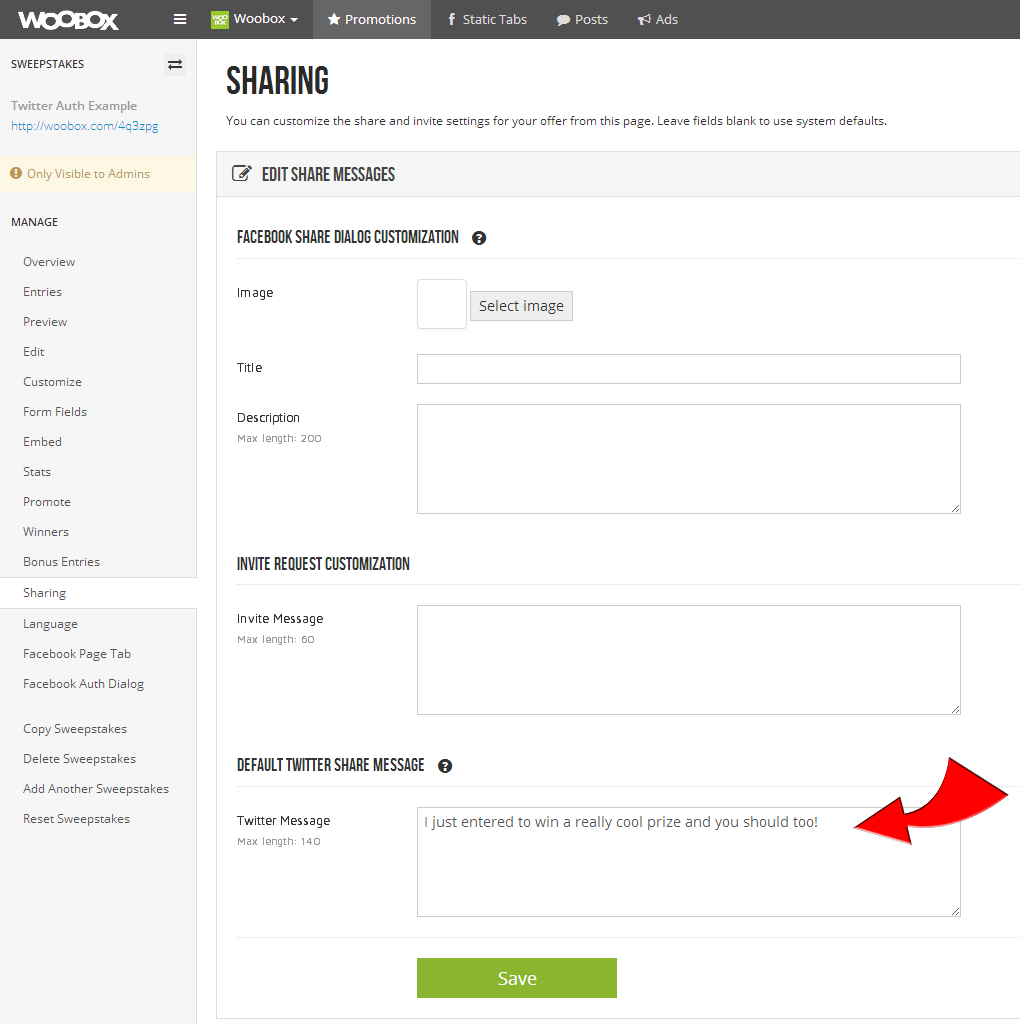 When entrants Tweet the promotion via the share dialogue it will auto-fill with your default message that includes a link to the promotion page:

We’re excited to share this new feature with our customers! Please don’t be shy about sharing your stories in the comments section below.